Nigerias National Motto is Unity and Faith, Peace and Progress 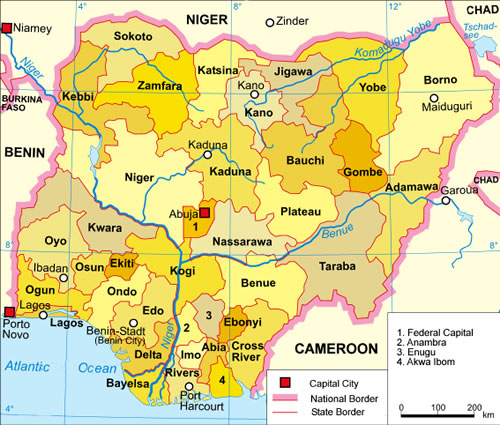 Nigeria is located on the west coast of Africa and is the most populous black country in the world, bordering the North Atlantic Ocean, between Benin and Cameroon. Nigeria covers 356,668 sq miles (923,7770 sq kilometers). It is about the same size as California, Nevada and Utah combined. Nigeria is diverse in people and culture. The history of the country goes back to 500 BC when the Nok people were the inhabitants. It was the ending of the 15th century European explorers and traders began their lucrative slave trade with the Yoruba and Benin peoples. In 1861 Lagos was colonized by the British and 1914, the entire country became The Colony and Protectorate of Nigeria. Nigeria became independent in 1960.
Find more information at the Wikipedia.

Arise, O compatriots, Nigeria’s call obey
To serve our fatherland
With love and strength and faith
The labor of our heroes past
Shall never be in vain
To serve with heart and might
One nation bound in freedom, peace and
unity.

Oh God of creation, direct our noble cause
Guide our leaders right
Help our youth the truth to know
In love and honesty to grow
And living just and true
Great lofty heights attain
To build a nation where peace and justice
shall reign.

PUBLIC NOTICE
This is to notify the general public that the Embassy will be closed to all activities on Thursday 26.05.2022, to mark Ascension Day. The Embassy will reopen for official business on Friday, 27.05. 2022